An 18th Century English Revenue Ace of Spades - perhaps not

This interesting item came to light at a recent auction of Italian Printed Sheets and Cards.

Aces were printed by the Stamp Office, using intaglio plates, then these sheets were returned to the Playing Card Maker for pasting onto the backing board.

So what can we say about this Ace.

Firstly,  no such maker is recorded by the Worshipful Company of Makers of Playing Cards despite the fact that one website has a pack of the correct period with this Duty Ace with the addition of the words GENOA.

Examining the Ace shows that the regnal number III is partly obliterated by a decoration. That decoration should be in a leaf format as it should be on the right hand side of the garter.

The symbol, under the DIEU ET MON DROIT, looks nothing like it should.

It was at that point that the engraver would denote any re-cuts.

So this is a fake, maybe the Italians, if indeed they were the forgers, were trying to cache in on the this lucrative trade that was seated in Belgium.

The paper is adjudged to be early 19th century.

So it is offered as a Fake but an interesting one. 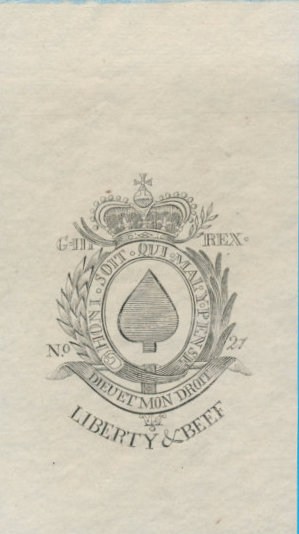 An outer wrapper for six packs of playing cards by Hall & Bancks c18123. These are for their branded “THE GREAT MOGUL” made at their No: 15 Piccadilly, London premises. The wrapper is 33cm by 31cm – the central graphic measuring 10cm by 27cm.The wrapper bears the inscription “CARD MAKERS TO HIS MAJESTY THEIR R.H THE PRINCESS DUKE & DUCHESS OF GLOUCESTER AND PRINCE LEOPOLD”
Nice crafted central graphic pain of a Great Mogul with a border with the four suit signs.